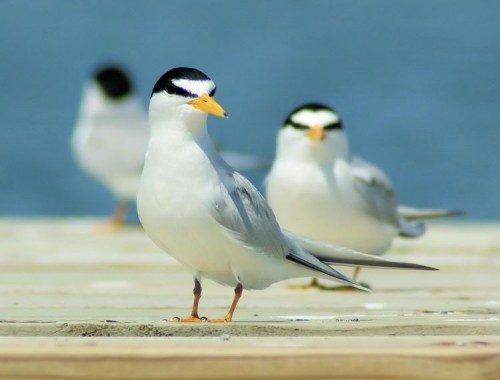 I am not a birder and here’s the proof. On May 9th I posted this same pic and identified these birds as Common Terns. I was wrong. Wrong, wrong, wrong.

These handsome fellows are actually Least Terns. I was looking for Piping Plovers Sunken Meadow Park and I thought a pic of one the signs that marks the protected nesting areas of the plovers might make a nice addition to a post. That was when I noticed that the signs also included Least Terns. The illustration on the sign looked suspiciously like the birds that I thought were Common Terns out of breeding plumage.

Uh oh. I could feel an embarrassing moment coming on. So I emailed my friends Janine and Nancy at Sweetbriar Nature Center and asked them. Janine originally wrote they were penguins in disguise, but I think she was just putting me on because then she identified them as Least Terns. Nancy was unsure so she forwarded my email to Birder X, another Sweetbriar educator, who also confirmed that the birds in question were indeed Least Terns. Birder X also informed us that these terns are threatened but that they nest here.

When I was writing the original post I was concerned that I might be confusing Common Terns with Forster’s Terns. I was so busy looking at tail and wing lengths that I missed what should have been obvious. One turned page in my Sibley’s shows that distinctive white forehead. Here is a pic of the sign that helped show me the error of my ways. JK