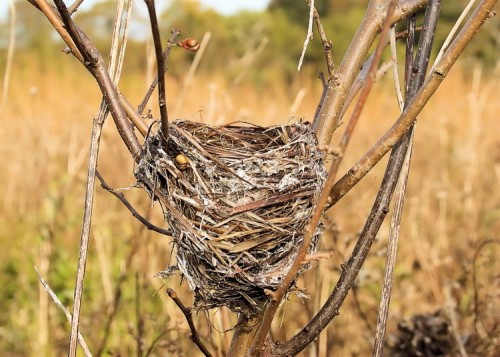 These are pics of a bird’s nest I found in the farm fields at Avalon. It’s probably been there since last spring. It’s only about six feet off the trail and at a height of about 5.5 feet, it’s pretty much eye level for many of the folks that tread these paths but because the wildflowers that grow here are so thick and tall this nest was probably invisible to nearly everyone. I myself have walked past this nest countless times without ever even suspecting it’s existence. It wasn’t until the autumn die-back of most of the flowers here that I discovered it. 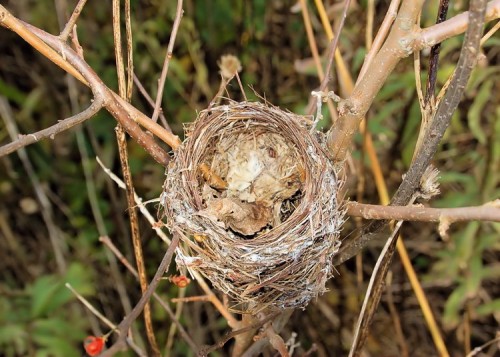 I sent this pic out to a few friends and the general consensus was that this was a Red-winged Blackbird’s nest. I was the only dissenter, but only because the only confirmed Red-wing nests I ever see are suspended from  reeds or cordgrass right on the river. I wouldn’t expect to see one here in the farm fields but I did some reading and according to Arthur Cleveland Bent, while nesting near water seems to be a preference for Red-wings, upland meadows are also very suitable. The fields at Avalon certainly qualify as upland meadows and during the spring and summer I often see Red-wings here so I am fairly certain that my friends are right about this being a Red-winged Blackbird’s nest. JK