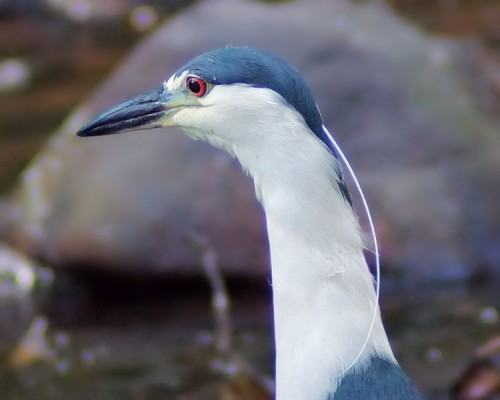 Here’s a head shot of a Black-crowned Night Heron. Its plume is clearly visible from this angle along with that beautiful red eye. This is a pic I would never have gotten without a head’s up from my friend Sue. Sue is also my boss at Four Harbors Audubon Society. She says, “Take this pic”, and I say, “Yes, ma’am, thank you ma’am. May I take another?” Anyways, as I was stowing my gear at the end of our August walk, Sue approached me and asked if I had seen the Night Herons behind the Old Grist Mill. I hadn’t. In fact, I hadn’t even looked. The Mill is directly across from the Duck Pond but there are so many times that I’m like a horse with blinders on. I just don’t ‘see’ it, if you know what I mean. Lucky for me, Sue did. I grabbed a camera and went to check it out. Right from the street I could see a proud-looking adult standing tall upon a rock. I took a couple of pics but even at street level I was still fifteen or more feet above him. I wanted to see if I could get a more horizontal shot so I scouted out the area. Just beyond the Mill is a private road and I like to be respectful of such things. Plus, I’m afraid of shotguns. Happily, the Mill itself has a back yard of sorts and I skirted around to the left of the building and found an opening. And there, from an angle not available from the street, I saw the largest concentration of Black-crowned Night Herons that I have ever encountered. There were at least fourteen birds within view. It was amazing. I see these guys nearly daily on the Nissequogue River but never in such numbers. A real treat. I don’t think that the Old Grist Mill will be one of my blind spots anymore. Thanks, Sue, for opening my eyes.  JK

4 thoughts on “The Plume, Boss, The Plume”