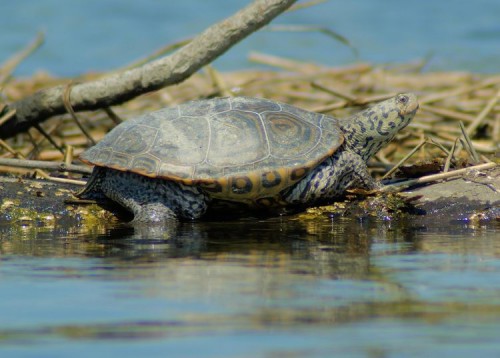 I spent five hours on the river Tuesday. I did the bull and back, about 3.5 miles each way. The bull is the Smithtown bull on Rt.25 where Rt.25A splits off and goes north. That is almost the southern end of the navigable part of the river. There’s less than a quarter mile of river south of Rt.25. It does not take five hours to do the bull and back. I went at a very leisurely pace and afterwards I explored some of my favorite haunts at my end of the river. Generally the bull run can be done in three relaxed hours or less.

I cruised through Terrapin Station both coming and going and saw at least a dozen Diamondback Terrapins. As long as you approach quietly and slowly you can almost always find terrapins here. The scales on the guy below are peeling. I neglected to bring my sunblock, too. 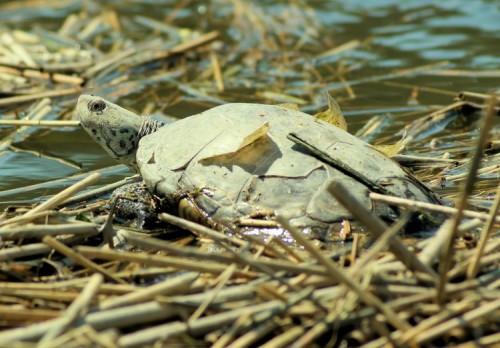 I also saw several snappers, one of which was huge. Humungous. You could land planes on his back. I’ll post his pic tomorrow. There were lots of pretty red-orange jellyfish in the water. You may not want to swim with them but they are cool to watch. Common Terns are starting to show up in numbers as well. Sharp looking birds. JK

I hit the river again yesterday morning. Launched at 7AM and got out at 10:30 to beat the afternoon storms. I had a nice, sunny, morning heading out but I caught some wind and chop coming back. Nothing terrible, just enough to make it fun. Missed a chance at three pairs of Mergansers on the way home. My camera was stowed away due to the waves so I just slowed down and enjoyed the sight

I wanted to go into Sunken Meadow Park since the tide was high and that’s the best time to enter the inlet there. The entrance to the park is right at the mouth of the river and when the tide is near low the current will push you around pretty good. Sometimes I think it’s easier to get in and out of the river than it is to get into Sunken Meadow. So, to get back to my story, the dredge – the river (or parts of it) is being dredged – and it’s accompanying boats were parked just inside the mouth of the river and I didn’t want to navigate past them, especially since I knew bad weather was coming and the return trip might be less than fun. Call me a coward. I’m comfortable with that.

So, instead, I decided to head upriver to Terrapin Station to see if I could find some turtles. Terrapin Station is not just a good Grateful Dead album it’s also a moniker of mine for a set of small islands are about halfway up the river that is usually good for a Diamondback Terrapin sighting or two. Alas, there were no terrapins waiting for me, so went a bit further. While exploring a narrow channel off the main part of the river I came across a Snapping Turtle. He headed for the mud as soon as he saw me, but it was cool seeing him anyway. I like those big ugly guys.

That was the good news. Heading back towards Terrapin Station, and feeling lucky, I startled a turtle sunning himself. I only heard the splash but I caught sight of him before he got too deep and I’m 90% certain that he had yellow striping down his legs. And that’s the bad news because that yellow striping probably makes him a Red-Eared Slider, a common but non-native species to Long Island waters. I didn’t see the red ear but but the striping is enough to make me think the worst. In the three years that I’ve been kayaking on the Nissequogue River, this is the first time I’ve seen a turtle that wasn’t a diamondback or a snapper. Unfortunately, you can find them all over in the Carman’s and Peconic Rivers. Other places, too.

Red-Eared Sliders are usually those cute little green turtles that are commonly, if illegally, sold in pet stores. When they grow up, and they do grow, they’re often released in waters where they don’t belong. Like here.

Here’s a pic a took of some cormorants sunning themselves. It’s just an okay photo but I want to cheer this post up some. JK 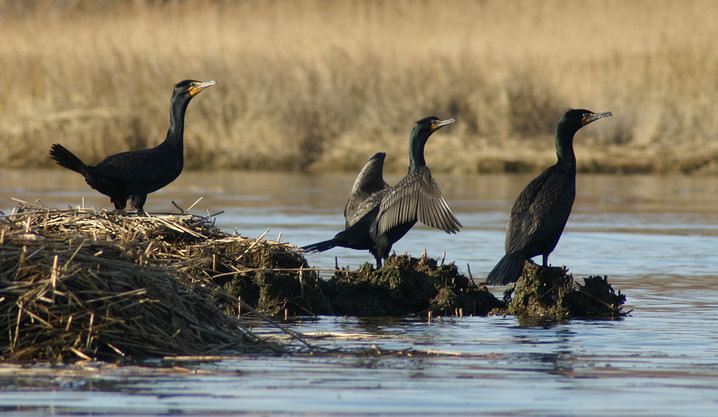