I’m a guy who enjoys photographing Mother Nature in all Her varied forms. Folks that know me are aware of this and sometimes they give me a head’s up for photo ops. More than several times my friends have directed me to potential shooting sites. It’s good to know fellow nature lovers. More often than not, it’s those same folks that lead me to some of my favorite sightings.
This time it was my friend Patrice from Four Harbors Audubon Society who piqued my interest with her amazing photographs of a baby Great Horned Owl in its nest. I loved her shots. I was wowed. It seems that a pair of Great Horned Owls had taken up residence in an old Coopers Hawk nest and produced two rather large and fluffy owlets. I have seen baby Great Horns before but this is not something that gets old in my book. I wanted to see if I could capture some photos of my own.
This sort of thing is much easier said than done. Trust me.
On my first visit to the nest site, I was escorted there by my friends Sue and Diane. Sue is my boss at Audubon and Diane is the sole caretaker of the park in which the nest is located. I followed the two of them along the trails till we reached the nest site. I must confess that I was enjoying the day much more than I was paying attention to where we were going. It was the middle of March and there was still plenty of snow on the ground, including a few icy patches, but it was a relatively warm day with lots of sunshine and very little wind. A fine day for birding. We got to the nest site and Sue pointed out a rather large dead stump of a tree that she and Diane used as a marker. Both ladies pointed out the nest to me. At first, I couldn’t see it. At second, I couldn’t see it either. Do you remember the phrase ‘not seeing the forest for the trees?’ Well, in this instance it was a case of not seeing the tree for the forest. And when I finally managed to see the nest and the baby I took as many shots as I could. I shot from up close. I shot from afar. I shot from different angles. I walked on and off different paths trying to get a decent shot of the young one. And I got nothing. Bupkis. Sometimes that’s just how it goes. That’s a bit of a lie. There are lots of times that I miss the shot. More times than most. Honest.
I decided to give it another try. I went back about a week later. This time I came equipped with a pair of cameras, one of which was connected to my biggest lens and a tripod. The tripod was necessary because the camera/lens combo is heavy and it’s very difficult to focus without proper support. I am no one’s idea of a spring chicken and I can use all the support I can get.
So there I am, back at the park. I’m toting over twenty pounds of camera equipment, most of it over one shoulder or another. I keep switching shoulders because the weight catches up to me. Again, I’m not a kid anymore. Despite having been practically hand-led to the nest site, I promptly got myself lost. I must have zigged when I should have zagged. It’s a gift: I can get lost anywhere. It’s something I inherited from my Mother, along with her good looks, so I really can’t complain too much. 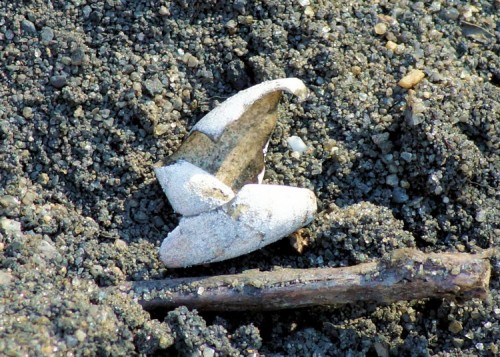 As I was hiking about, I came across a couple of spots where Raccoons had raided turtle nests. It’s sad but this is Mother Nature at work. The hope is that the turtles manage to produce enough eggs to satisfy the local predators and still keep their populations going. 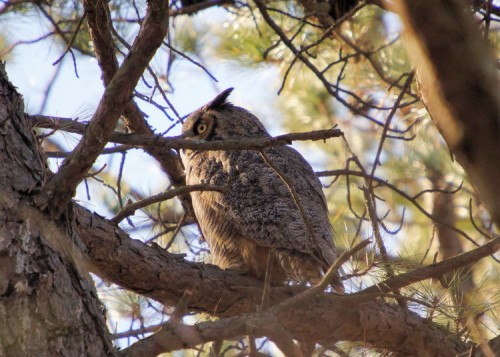 I wandered the trails for just over an hour before I caught a glimpse of my quarry. I hadn’t found the nest but I managed to observe one of the adults flitting amongst the canopy. Actually, ‘flitting’ is a complete misnomer because these are big and heavy birds. They don’t ‘flit’ anywhere. Their flight is both ponderous and magnificent. I followed as best I could. Mind you, I was no longer looking for any nests at this point. I was looking for a shot of this beautiful bird. Great Horned Owls really are quite awesome.

As I was tracking this bird I found myself face-to-face with the marker tree that Sue and Diane had pointed out to me. I had managed to come across it from the opposite direction that Sue and Diane had taken me. The marker tree made locating the nest much easier. After all, it was right above me. I maneuvered my camera to a couple of appropriate shooting spots and fired away. It was fun but my best shots of the day were of the adult steadfastly ignoring me. And so it goes. You can try to plan your shots but Mother Nature always has the last word. She’s everybody’s boss. JK 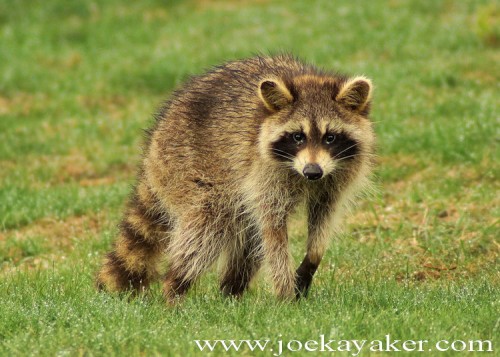 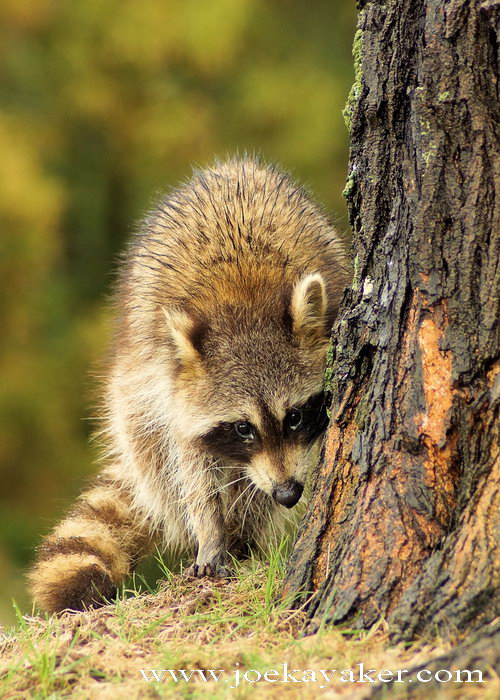 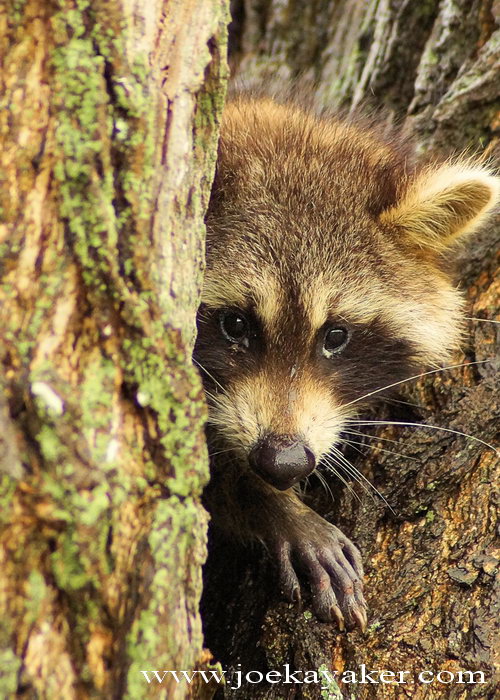 Last week I indulged myself with a paddle down the Lower Carmans River. It’s not as close to home as my beloved Nissy, but for sheer abundance of beauty and wildlife, the Carmans just plain rocks. This has been one of my favorite stretches of Long Island waterway for years. 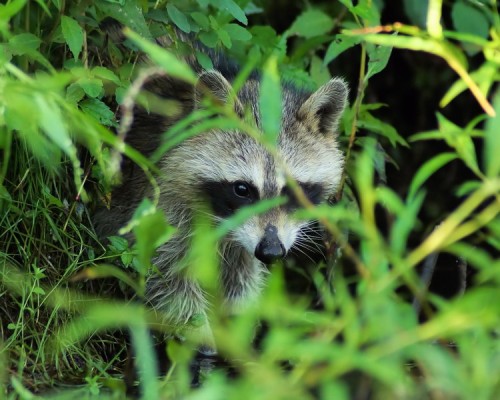 Along any river, there are always several nooks and crannies to be found. I’m always looking for these ‘holes’ as I like to call them. Sometimes they’re small streams or creeks that feed into the main river, but more often than not, they’re just little dead ends that lead nowhere. Either way, these hidden spots with slow moving water tend to attract a good of wildlife. I was checking into one of my favorite holes when low water brought me up short. This sort of thing happens. I found myself at the edge of a sort of cul-de-sac or small pond off the river proper. I couldn’t enter as an underwater root or branch was impeding my way, but this spot has been lucky for me in the past so I stayed put to see what I could see. Plus, this is a real peaceful spot and I have always enjoyed stopping here. 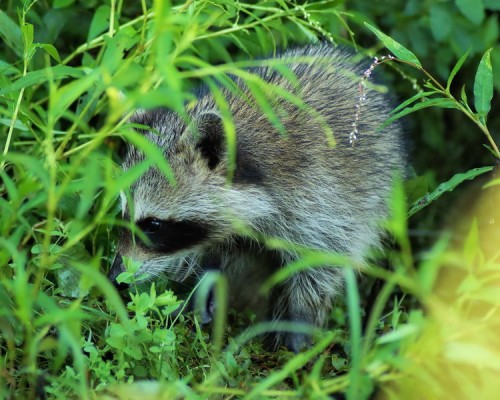 As I’m sitting there, thinking about breaking out a sandwich, I hear some movement in the thick undergrowth to my left. I grab my camera, hoping for a glimpse of what’s there, when a small Raccoon pops out of an opening in the grass right at the edge of the water. He has a ten-second look at me and disappears back up the bank. While I was still thinking “Wow! That was cool!”, and “Gosh! I hope I got a shot”, the little guy reappears and does the same exact thing. A look at me, and gone again. By this time I could hear him being scolded by his mother. Almost hidden in the foliage I saw glimpses of at least two of his siblings and later I saw Momma Raccoon herself as she skirted the small pond with the family in tow. They returned the way they came and then this guy came out to see me for a third time. He was the only one from amongst his litter mates to check me out. I can tell from that scar on his nose. He probably got that scar from not listening to Mom on some previous occasion. But he’s obviously okay and still just as curious as ever. This Raccoon is going places. JK 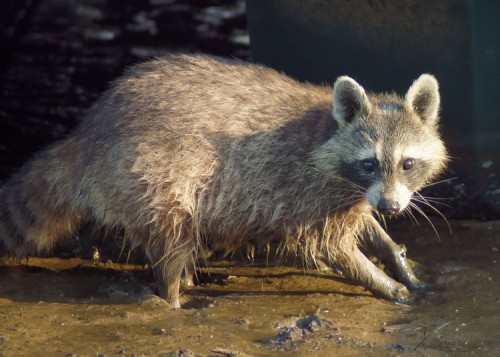 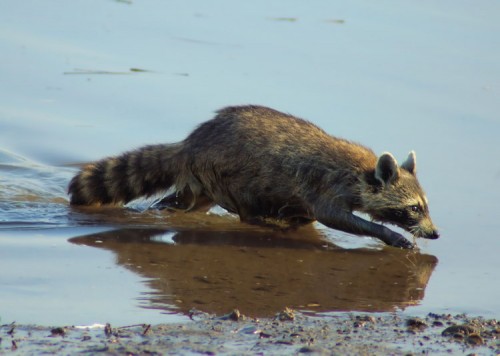 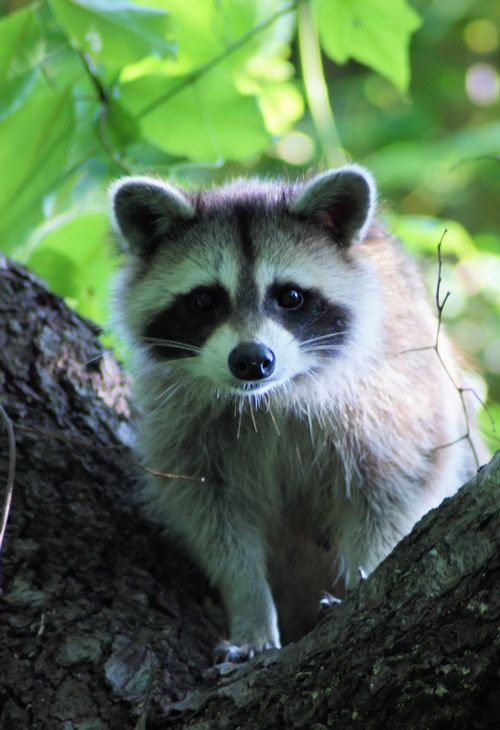 While tracking turkeys about a month ago, I observed this raccoon clamber out of a tree and begin to follow the turkeys, a hen and six of her chicks. When he realized that I was around he climbed back up his tree and checked me out from a safe position. I’m not sure why he was following the turkeys. The young turkeys were nearly as big as he was and seemed (to me) to be too big for this guy to tackle. He’s not quite full grown himself. Maybe he was driven by curiosity or perhaps the turkeys scare up suitable game for raccoons while foraging. In any case, it made for a decent photo op. JK