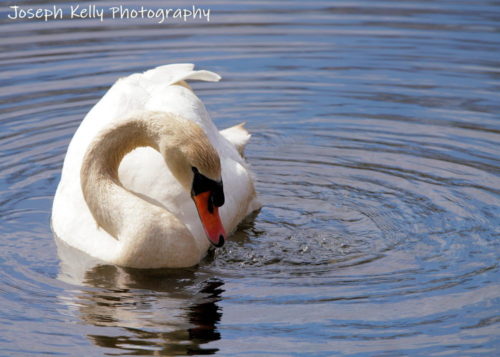 This Mute Swan and his mate are longtime residents of the freshwater pond at Morton Refuge, which is a National Wildlife Refuge on federal land.

As you may or may not know, Mute Swans are under siege in the United States. They are viewed as an invasive and disruptive species. Mute Swan eggs on state or federal land are often “addled” to prevent hatching. Addling means they are tampered with either by oiling, which prevents the egg bound chicks from breathing, or by shaking, which, well, makes a scrambled egg, only without the cooking.

Right or wrong, Swans have very good reasons not to be crazy about humans. One can hardly blame them for disliking us. Last year, the authorities missed an egg and this couple successfully raised a single cygnet.

Back to this particular Swan. He and I have known each other for several years. I am not such a frequent visitor to his pond that I can be certain that he recognizes me, but he does seem to realize that my intentions are not malicious. His mate, not so much. She’s much meaner than he is. She even bit me last year as I was feeding him sunflower seeds. Again, I took no insult, as I fully understand that these birds have no reason to trust us bipeds, even photographers.

Anyways, last week, as I was sitting near their pond, the male, this male, chased out a pair of Canada Geese. I wasn’t crazy about that, but boys will be boys. By the way, it’s this sort of behavior that the DEC frowns upon. Afterwards, tired from his efforts but still high on testosterone, he decided to rest near a well traveled path, one that had a short wooden plank-way that went over a stream that connected to the pond. People have to cross the wooden planked path to get past the pond area. There’s no way around it. And with an agitated Swan parked at one end of the “bridge”, crossing the bridge was a precarious task.

I was nearby, resting and photographing pond life when I heard the tell tale thumping of folks crossing the plank bridge. It was a father and son, and the son was about fifteen years old, maybe older. Not a small kid. Taller than me as it turned out.

Dad was halfway across the bridge when he saw the Swan at the other end. He said aloud, “I do not want to mess with you” to the Swan, but he and his son stayed on the path leading to the bridge. I figured they’d work it out, but they just hung out for a while. Ten minutes later, they were joined by Mom and a baby in a stroller. And, again, I could hear him say, “I don’t want to mess with that swan”.

Admittedly, I was not un-amused by Dad’s original predicament but when the whole family found itself flummoxed, I decided to see what I could do. I strode over, wearing my “authority pants”, trying my best to appear like I knew what I was doing, (which I totally did not), and confronted the angry Swan, saying, “Look, old friend, these look like nice folks and they just want to get past you. How ’bout you and I just walk over here and this family can go on their way?” I had gotten close enough that I had become the center of his attention and he escorted/followed me towards a wooded area, but away from the bridge, allowing the family to continue on their way.

Maybe they thought I was some kind of Swan whisperer or, more likely, some nut job in the middle of the woods. However, I can tell you that the Dad, the human one, took me aside later in the day and thanked me for my intervention.

The swan never got fully antagonistic with me, and after the family passed, he resumed his watch over the bridge and I went back to the pond to look for photo ops. As I mentioned earlier, this Swan and I are old acquaintances. Hopefully, we will remain on friendly terms for many years to come.  JK 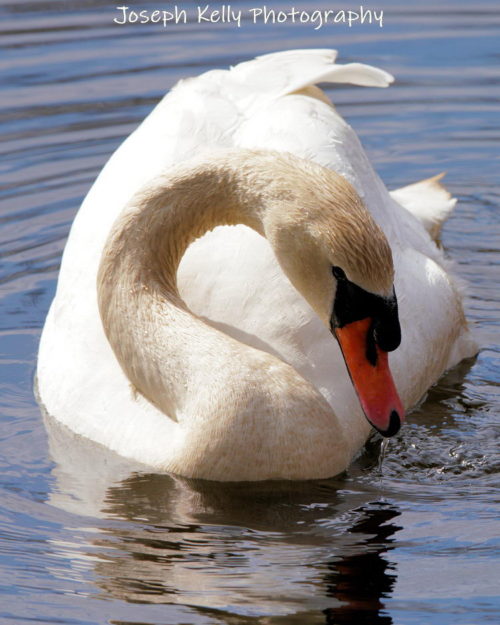