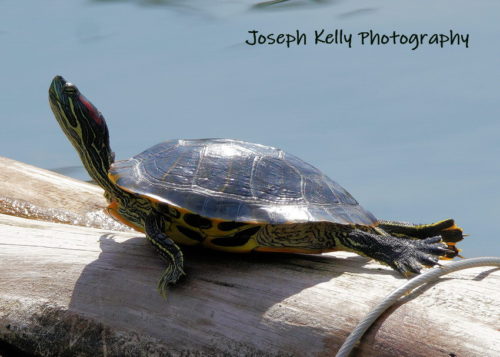 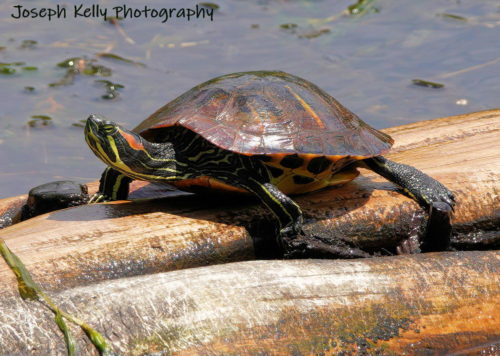 This is a photograph of a Red-eared Slider clambering aboard a floating log in order to sun itself. This is a female. One of the differences between male and female sliders is their size. The females grow larger than the males. Now, I realize that you cannot judge this turtles size by this pic, but I remember taking this photograph as well as the size of this pretty lady. She was pretty big. Another difference in Slider gender is the length and shape of the tail, but that doesn’t help us here because the tail is not in view in this photograph. So now we have a little conundrum. How can you, my dear reader, be able to judge for yourself the gender of this turtle? There are two more methods for making this decision. One concerns the shape of the plastron – that’s the bottom shell- but we cannot see enough to make any judgements. However, there is one more method at our that we can put to use. Do you see the size of the claws? Male Sliders have much more longer claws than females, more than twice the length than their girlfriends. It seems that the males need longer claws to help them get a better grip while mating. The pretty lady in this photo has sensible nails. 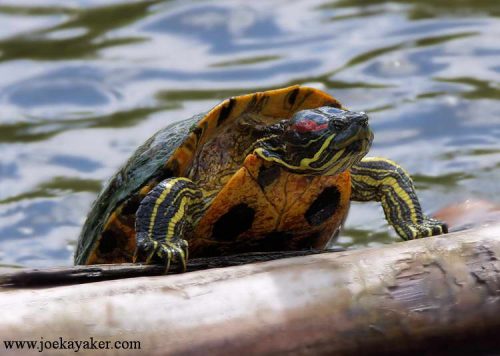 Those of you that read this blog on a regular basis are probably aware of my basic disdain for this species of turtle. My complaint is that these turtles do not belong in Long Island ponds or rivers, but there is no denying their basic beauty. Of course, that beauty is the reason we find them here. In days past, these animals were staples of the pet trade. One could purchase a baby Slider in a tiny tank for a very fair price. The new owners were not aware of how large their new turtles could grow. In a few short years, that two inch cutie can grow into foot long beast. Not many folks plan on such contingencies, and, for many people, the easy solution was releasing their beloved pets into the wild. Unfortunately, despite being a southern species, Red-eared Sliders turned out to be very hardy. They manage our northern winters quite well and have managed to reproduce several generations. They are now a fact of life here on Long Island but they do serve as an example of the dangers inherent in releasing non-native species into the wild. You see, while there is no denying the beauty of Red-eared Sliders, they are beginning to crowd out our native freshwater turtles, the Eastern Painted Turtle, which is, in my own view, an even prettier turtle. JK.