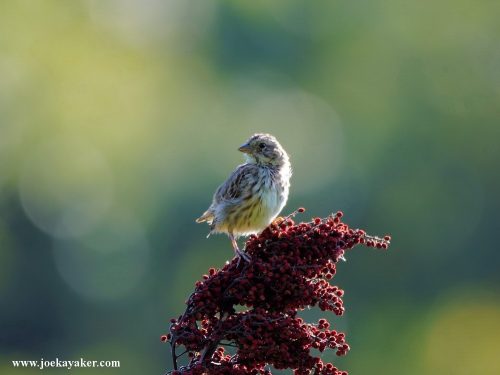 This is a Song Sparrow. It’s, well, singing. Do I really need to embellish upon that? This bird sings better than I write, not that that’s hard to do. It’s also much prettier. Of course, that’s even easier. JK 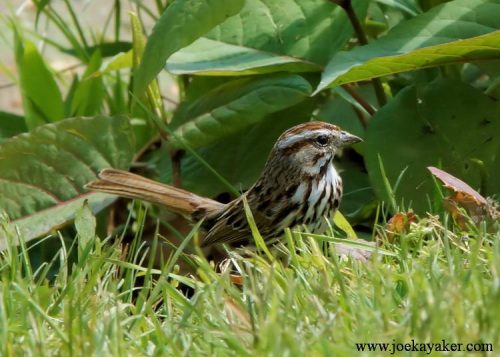 Here’s a shot of a White-throated Sparrow I saw at Avalon Preserve This is the same bird I mentioned in my Bobwhite post. These little guys have always been a favorite of mine. One often expects a sparrow to be rather drably decorated but click on the pic and check out that bright white bib and those canary yellow patches between the eyes and bill. This is one good-looking bird.

This was this species that first got me involved with Audubon. I had taken a shot of a bird braving a snowstorm back in February of 2008. I loved the shot but I didn’t know what I had so I sent the pic to my friend Sue at Four Harbors Audubon Society. Sue introduced me to several folks, via email at first, who could help me identify the birds I’d been capturing with my camera. Whenever I couldn’t determine a species, which was pretty much darn near all the time, I would send a pic out to these folks and they would ID it for me. Eventually, Four Harbors asked me to become their photographer. Either they were very happy with my pics – it’s a possibility – or they had grown tired of my incessant questioning and were hoping to shut me up. I tend to believe that the latter hypothesis is closer to the mark. Either way, it has never stopped my questions. In similar fashion to the Energizer Bunny, I keep asking and asking and asking. JK

Warning: Unknown: Failed to write session data (files). Please verify that the current setting of session.save_path is correct () in Unknown on line 0