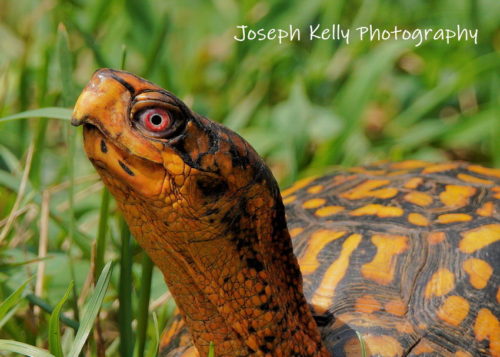 This handsome beast is a male Box Turtle. He doesn’t have an official name but he does have a number. And a tag. Number 150 lives on the grounds of Sweetbriar Nature Center. He’s not a pet, nor is he an “inmate” or one of our rehab turtles. He’s a free roaming Box Turtle with full access to the full 54 acres that Sweetbriar has to offer.

It is probably natural to question how such a turtle has a number or is even recognized at all. The answers to both of those queries are fairly simple but you can count on me to be a bit long-winded in my explanation. You’re lucky to be reading this because I’m even worse in person. I can edit myself in print, not so much while I’m speaking. 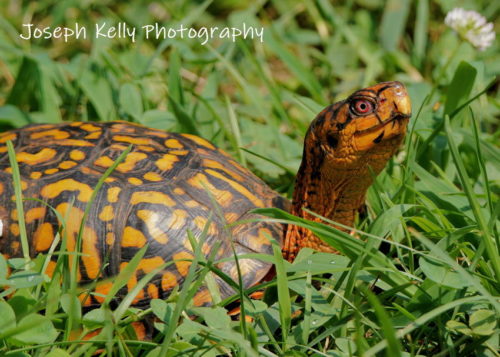 If you’re a regular reader, you know that I am a long-time volunteer at Sweetbriar Nature Center. Sweetbriar is a nature based educational organization as well as a wildlife rehabilitation center. During the course of each year, we have several large events in which we need to mow the open fields to allow room for parking. Being a wildlife rehab center we certainly don’t want any of our native residents getting injured. In the weeks prior to the mowing, we have teams of volunteers walk the fields in search of Box Turtles. Any turtles that are found are documented and put into enclosures for safe keeping. Documentation generally involves the when and where, especially the where, as we want to return each turtle back to its own home turf.

We also measure and weigh each turtle so we can keep tabs on their growth and general health. Speaking of health, any turtle that we find gets a checkover and any needed treatment. We take good care of our friends.

Most of the turtles found in previous years have been “tagged” in one way or another. This is usually a numbered tag that has been glued to the turtle’s shell. The tag allows us to recognize particular turtles. In the past few years we have also photographed each turtle. This comes in handy if and when a tag falls off. Each Box Turtle has its own markings on both its shell and face, much like fingerprints.

It has often been my lot to identify turtles by photo when a tag is not present. Something to do with me being a photographer with an eye for detail. Truth be told, my eye for minor details has come in handy on occasion but it can be a tedious process. On the other hand, examining minute details of Box Turtle markings is an illuminating experience. So many intricate designs, so many minor differences. This particular chore is not as terrible as it may seem. 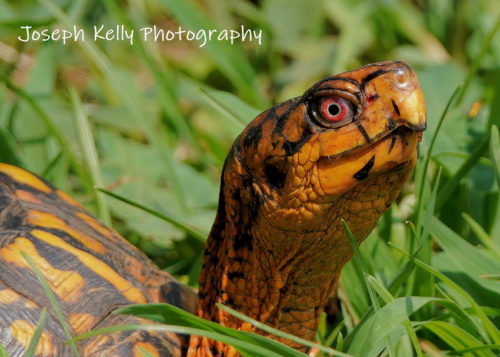 So, back to #150. This has been a weird year because of COVID. Sweetbriar hasn’t been able to hold any large events, so we haven’t had the need to sweep the open fields for Box Turtles. This does not mean that we have given up on keeping track of the turtles on the grounds. When we find one, we still give it the once over and document the encounter. As it happens, I spotted #150 making his way across the back lawn recently. He had been tagged but apparently never photographed. I took care of that. It turns out that #150 hadn’t been seen for five years. This is not unusual when you consider that Sweetbriar is situated on 54 acres. There’s no way to keep track of every turtle in such a large area.  Number #150 was in perfect health so we set him on his way. I hope to run into him again. JK. 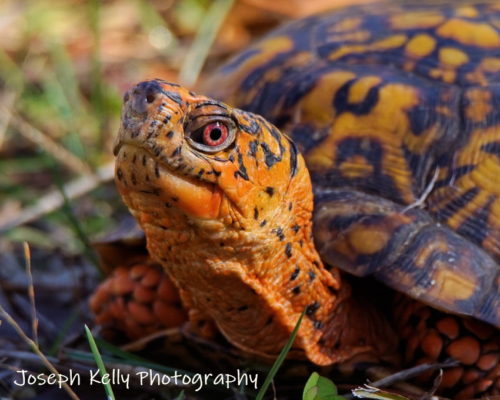 This is a male Eastern Box Turtle. Look at those colors. Is he not magnificent? I very nearly missed seeing this handsome brute. In fact, were it not for younger eyes than mine, I would probably not be showing off this guy to you.

I had been hiking through Morton Refuge when I decided to rest my legs on one of the benches. I’m a big fan of benches. The older I get, the more I appreciate a good bench. So I’m sitting there on my bench, when a young man of maybe eight or ten years and his Grandmother came walking up along the same trail I’d walked not ten minutes previous. We exchanged pleasantries and the youngster mentioned seeing a turtle. I asked where and he showed me the spot not thirty feet away. A quick search and there he was, in all his orange and yellow glory. 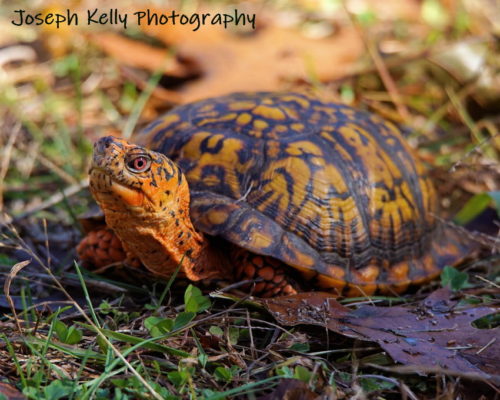 The turtle got a bit spooked by our presence and quite sensibly tucked himself in. So I pulled out my collapsible chair – look benches aren’t always exactly where you need them to be – and sat my self down to wait him out. Eventually, he began to emerge from his shell and I was there waiting for him. After a bit, he crossed the trail and headed into an open field. He got to where he was headed and I got these pics.  JK. 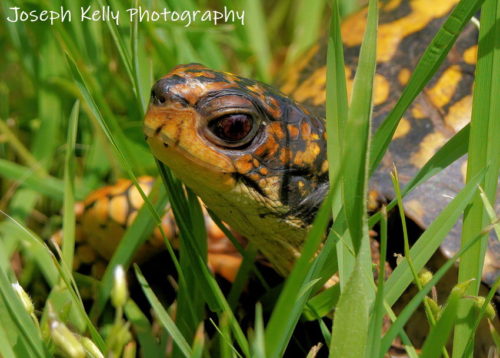 Meet 209. She is a youngish female Eastern Box Turtle that happened across my path as I was walking the grounds at Sweetbriar Nature Center. She’s not yet fully grown but I have met with this particular turtle before. As a long-time volunteer at Sweetbriar, it has been my sometime job to document the Box Turtles that roam the property. As a result, it has been my good luck and fortune to meet many of the free-ranging residents. This is not a captive turtle, but she has been tagged and documented.  JK 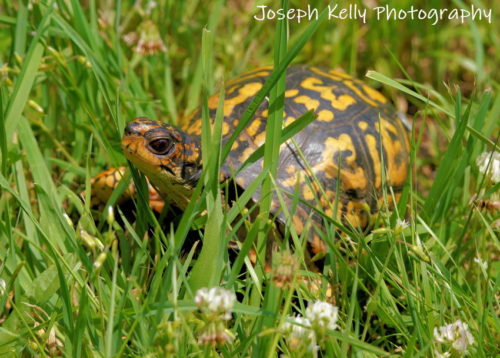 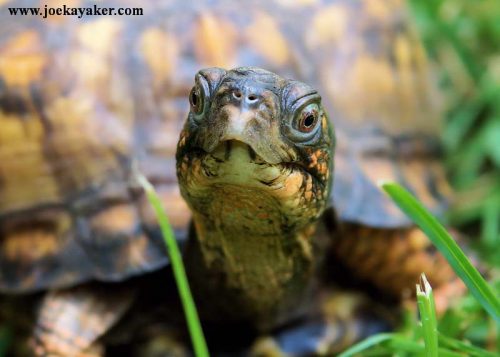 This is an Eastern Box Turtle. I encountered this little lady at Sweetbriar Nature Center. She’s not quite a full-grown adult yet. While no longer a baby, she still has at least an inch to grow. 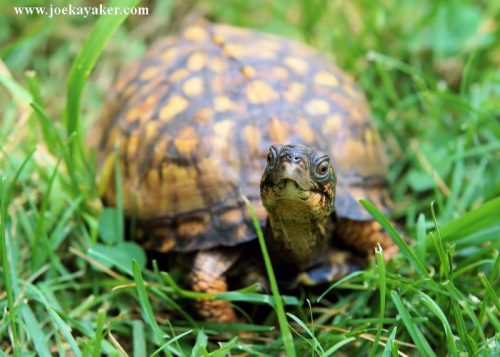 I was able to discern her gender using two methods. The first, which is not foolproof, concerns the color of the eyes. Males tend to have bright red or orange irises, whereas females usually have brown eyes. A more certain method of determining the sex of a Box Turtle is to pick the turtle up and have a good look at the plastron, or bottom shell. The plastrons of the males are concave which comes in handy during mating. 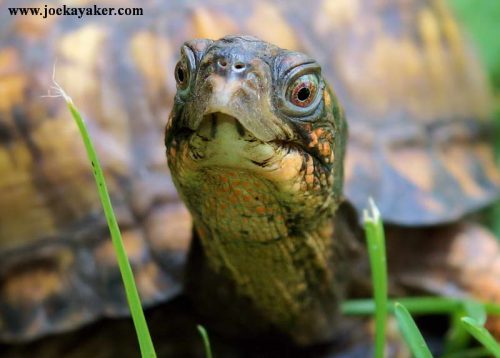 There are a few more methods that can be used to differentiate between male and female Box Turtles but, judging by the look she’s giving me here, perhaps enough is enough. Maybe that conversation can wait for another day. JK